1: Kitchen and Burner for existing house or new house.

3: Puja or worship room and orientation.

4: Bed room location and orientation of bed for conceiving baby.

5: Office location and orientation of furniture.

7: Garden , Car parking are and storages.

8: Vastu compliance as per Business needs .

Remember, a house / building / interior constructed as per the principles of Vastu will definitely yield good results and lead to a happy life for its residents. Also that Vastu is more than the placement of a window or door during construction of the house. The science works on the basic principle that the earth or soil is actually alive, and that all living or organic creatures emerge directly from it. This life force with the earth is called Vastu, and all objects placed on it share this life force. 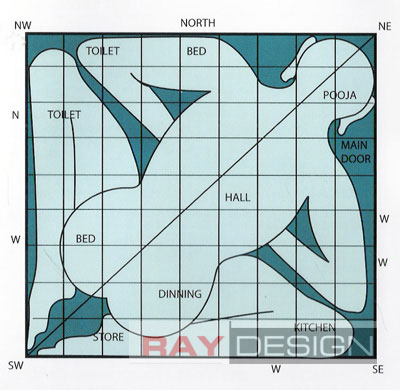 Vastu is a systematic study of the impact of the rays of sun on the earth. The conditions caused by such an effect greatly influence the planning and construction of a house. Vastu reads the characteristics of houses and explains their influence on its residents in a scientific manner.

Vastu can actually be put into practice to result in happy, prosperous lives for the residents of a house. Those of you who want to construct a house simply need to observe the characteristics of an ideal house prescribed by Vastu. Its’ guidelines can be put to use for correcting flaws in already-built houses too! So there, apply Vastu and reap the advantages!

Vastu is based on properties of the earth that are permanent, unchanging. Consider this; the earth has been revolving around the sun for millions of years, and due to its magnetic properties a compass always points North. Likewise, Vastu is a permanent feature of the earth, its effects therefore are forever.

Can any science which is not beneficial to mankind be considered useful ever ? By creating comfort, ease in habitation and happier lives, Vastu has proven its role in adding value to society.

Our faith in Vastu is founded on the ties between the earth and the sun. Derived from such origins, Vastu and its influence on man cannot but be universal.

Once upon a time, a king named Sankhu lost his empire in war with his enemies. On the advice of the celestial voice “Akashvani”, he performed penance on a hill situated to the west of a lake in his kingdom. His prayers were answered and soon he was successful in regaining his lost kingdom. What we learn from this is that there must be an elevated terrain to the west of the house. In the epic Mahabharata, Veda Vyasa cites the root cause of the great battle as Maya Sabha, meaning royal assemblywhich was built by Maya the divine architect in the shape of a perfect square, with a perimeter measuring 10,000 cubits.

Q. Why Commercial Street in Bangalore is such a sure-winner for all businesses based out of its busy street ?

A. Commercial Street extends to the west and the east, sloping down in both directions. Kamraj Road that lies on its eastern boundary extends towards north and south, sloping towards north. You will find also that all roads adjoining Commercial Street slope towards the north – Mariamma Koel Cross Road, Laxmana Modaliyar Road, Narayana Pillay Street, Jewellers Street, and Masjid Street. All roads tend to raise Commercial Street to its zenith, thereby affecting favourably the fortunes of those who work out of here.

The 8 directions of Vastu

Every direction has a distinct influence on the house. If they are all put to proper use (read as per Shastra), the 8 lords, the Ashta Devas will usher health and prosperity in the household.

By direction, we mean the direction which the main door of the house faces. If not the main door, at least one other door should be in this direction. Pick your direction as per your birth star below – 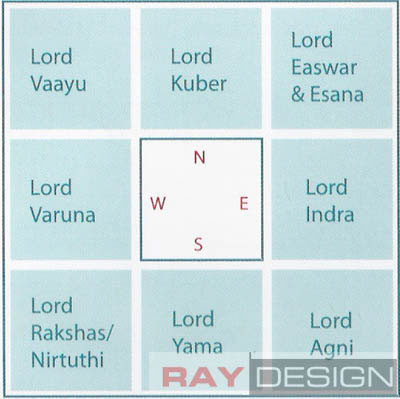 Q. Why is the North-East direction so important in planning ?

A. The North-East is the most beneficial among the 8 directions. The lord of this direction is Easwar, the omnipotent who brings all blessings to the residence. Do not have toilets, store room or kitchen located in this direction of the plot. Have more openings on the walls facing this direction; do not block or close this direction.

Q. Do not place the head towards North while sleeping’. Is this true, and why ?

A. An age-old maxim of Vastu lays down that the head should never be to the North while sleeping. Medical science clarifies that if the head is placed to the North; blood circulation to various body parts is affected, causing migraine and disturbed sleep. If not always practicable therefore, it is better to orient the head towards south or east, but ever to the north or west.

Q. Do i have to be a Hindu to derive the benefits of Vastu ?

A. No, Vastu is secular and universal. Just as the elements, fire, air, space, earth and water place no restrictions on their users, so also does the practice of Vastu throw its tenets open to mankind at large.

Q. Does my house have an energy field ?

A. Yes, The morning sunrays have abundant positive energy which is useful to the body. The evening rays however carry negative energy that tires us. Likewise, Vastu Purusha takes his breath from the North-East direction; The energy received here is carried to the South-West direction to be stored. The NE serves as the positive pole and SW as the negative pole of the earth’s magnetism. While building your house, take care to have wide openings on the NE side and small openings on SW side.

The North and East are very important sides for the energy field of your house. They facilitate reception of cosmic energy, solar energy and magnetic energy.

Is there a good day to begin my construction ?

Leave alone construction, any good work is to be commenced at an auspicious time so that completion too will be to schedule. Pooja is with the intention of propitiating the Vastu Purusha. It marks 3 significant milestones –

Parts of your house – What comes where

Below are described some simple rules in the placement and orientation of the elements of your house. Do guard however against generalizations, it would be prudent to consult the Vastu experts from Ray Design World in arriving at a decision.

When it is not possible to have doors facing each other on opposite sides, provide for a window instead on one of the sides. This window can be at the centre of the wall.

Where the window is wider than the door, have them facing each other on opposite walls. The window can extend to either side along the wall length.

Where there are two windows each on the four walls of a room, place them at either end of each wall face. For example, corresponding to Eastern Northeast is a window to Eastern Southeast, and so on.

Almirahs can be placed either in between or on both sides of the window on a wall.

The design and location of a staircase in a house follows the functional requirements of its planning. There are however some points that you may do well to bear in mind.

The internal staircase can be located in any room excepting the NE or SE one. Keep the Eastern wall free of the step line; maintain a gap of at least 3″ between the two.

Keep the direction of movement along the steps –

Take great care in sinking a well or bore well at site. The ideal place is the Northeast. It can be either square of round in shape below the ground, but above the ground keep it to a simple circle. Any corner in its profile may exercise a diagonal effect which is not a desirable feature. Do keep the floor level of the platform around the well to a lower elevation that the plinth of the house.

The most ideal place for the hearth is the southeastern corner of the house. In no circumstance should the hearth be located in the northeast.

Use the rooms in southeast and northwest for the kitchen, rather than those in the east, south, west or north directions. The reason is simple. You’ll have sunlight streaming into the kitchen morning and evening, keeping your kitchen free from odour and dampness. It also subdues harmful insects from entering the kitchen. The rays of the sun also help in preserving vegetables, cooked food and pickles. Truly, an instance of age-old wisdom founded on natural science.

The sun is the soul and guiding figure of the practice of Vastu. One should pray therefore by facing West from the East, oriented in the resourceful direction of the Sun.

The bedroom is the ‘Heart of the House’, the resting place for the body and mind, where we spend a good amount of time when at home. Southwest is the most beneficial of all the directions, the master bedroom should invariable be located in the southwest. It can be provided in the southeast, and northwest too.

When necessary to have cupboards in bedroom of hall, have them in eastern wall preferable. When they are a necessity on all sides of the room, leave the northeastern corner blank.

Bathrooms are generally constructed either outside the house, as attached rooms to the bedrooms, or for common usage within the house. For bathrooms inside the house, eastern and northern rooms are the most ideal. Attached bathrooms can be towards –

If an overhead tank is located to the southwest, any structure of any type, can be built in any corner of the terrace.

The septic tank can be sunk in the east or north; avoid having it in any other direction. The direction of the WC should invariably be to the north or the south; and never to the east or west.